After severe erosion of beach front at the Boca del Rio, the Belize Tourism Board (BTB) embarked on a project to restore the beach front. The Boca del Rio project was officially inaugurated in a ceremony on Sunday, April 14, 2019. Besides the ceremony at which BTB was present there was a family day of fun, including numerous sports, prizes and music. According to their press release, BTB was extremely delighted to have been granted the opportunity to bring meaningful and lasting development to San Pedro via Boca del Rio project. It entailed the reclamation of 100 ft. by 370 ft. of the Boca del Rio beachfront; construction of a 100 ft. by 100 ft. swimming area; construction of a reinforced seawall and the installation of signage. 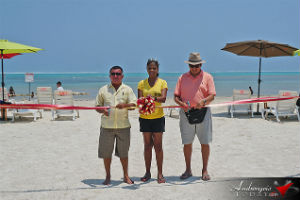 The project was a joint initiative of the BTB, the Minister of Tourism & Civil Aviation, Hon. Manuel Heredia Jr. and the San Pedro Town Council, in tandem with the National Sustainable Tourism Master Plan (NSTMP), and implemented by contractor Cayo Frances Limited. Situated at the mouth of the river (Barry Bowen Bridge), Boca del Rio separates the main town from Ambergris Caye by a channel frequented by swimmers and features a beach. Prior to its deterioration, the channel and beach attracted locals and tourists who wished to bask in the crystal waters and Belize sun. The area, now once again vibrant, has a park that is equipped with amenities such as chairs, swings, a slide and a basketball court.