The U.S. State Department has issued a travel warning for Haiti. 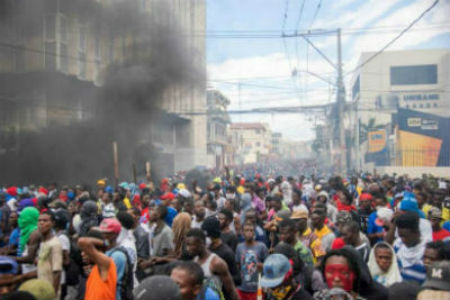 Americans are being warned not to travel to Haiti due to the flare-up of crime and civil unrest in the French-speaking Caribbean nation.

In a statement issued mid-February, the State Department noted: “There are currently widespread, violent, and unpredictable demonstrations in Port-au-Prince and elsewhere in Haiti.

“Due to these demonstrations, on February 14, 2019, the Department of State ordered the departure of all non-emergency U.S. personnel and their family members. The U.S.

government has limited ability to provide emergency services to U.S. citizens in Haiti.

Protests, tire burning, and road blockages are frequent and unpredictable.  Violent crime, such as armed robbery, is common. Local police may lack the resources to respond effectively to serious criminal incidents, and emergency response, including ambulance service, is limited or non-existent.

“Travelers are sometimes targeted, followed, and violently attacked and robbed shortly after leaving the Port-au-Prince international airport. The U.S. Embassy requires its personnel to use official transportation to and from the airport, and it takes steps to detect surveillance and deter criminal attacks during these transports,” the statement added.

Using any kind of public transportation or taxis;

Driving outside of Port-au-Prince at night;

Visiting certain parts of the city at any time without prior approval and special security measures in place.”

If you decide to travel to Haiti, the release warned:

Avoid demonstrations.  Do not attempt to drive through roadblocks.

Arrange airport transfers and hotels in advance, or have your host meet you upon arrival.

Be careful about providing your destination address in Haiti. Do not provide personal

information to unauthorized individuals located in the immigration, customs, or

other areas inside or near any airports in Haiti.

As you leave the airport, make sure you are not being followed. If you notice you are being followed, drive to the nearest police station immediately.

Do not physically resist any robbery attempt.

Purchase travel insurance and medical evacuation insurance ahead of time.

Enroll in the Smart Traveler Enrollment Program (STEP) to receive Alerts and make it easier to locate you in an emergency.

U.S. citizens who travel abroad should always have a contingency plan for emergency situations. Review the Traveler’s Checklist.