MIAMI  — On Saturday, November 2, 2019, the Miami-Dade Parks, Recreation and Open Spaces Department, together with The Mission Continues 1st Platoon Miami, United Way of Miami-Dade, and community partners, pitched in for the inaugural “Salute to Service Volunteer Day” at Miami-Dade Parks’ Seminole Wayside Park. The event is a preserve revitalization project for the park and an inaugural signature celebration for National Veterans & Military Families Month and kick-off the November Veterans Day festivities. 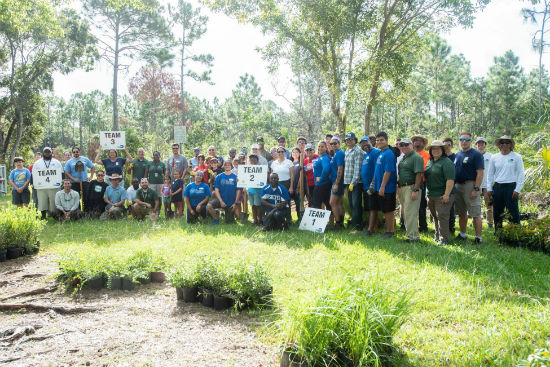 More than 30 community volunteers showed up to lend their time and brawn to help remove hundreds of pounds of invasive plant species from the park’s pine rockland preserve and plant more than a hundred new native plants at the site.  As part of the day’s activities, the volunteers were each gifted a firebush plant, a native species known for attracting pollinators and butterflies. Participants were given the option to either plant in their home garden or at the preserve.  They also had the opportunity to tour the preserve with a Miami-Dade Parks naturalists to learn more about its’ significance to the local environment and be part of a rain barrel painting project led by University of Florida (UF)/IFAS Miami-Dade Extension representatives, who offered up tips on water conservation in the process. Three painted rain barrels will be donated to area schools in support of UF/IFAS water conservation education.

View photos from the event here.

For directions and more information about the park, visit the web page.