UNITED NATIONS – Caribbean community (CARICOM) leaders have warned the international community that the “the clock is ticking” as the impact of climate change continues to severely affect their countries. 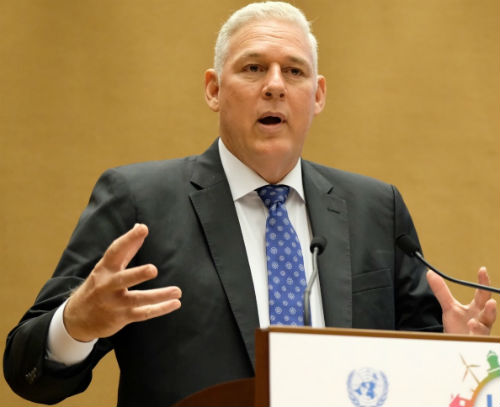 “Chastanet”St. Lucia’s Prime Minister Allen Chastanet, chairman of the 15-member CARICOM grouping, in his address to the United Nations Secretary-General’s Climate Action Summit here last month, praised Antonio Guterres for his “one-man crusade” in pressing countries to meet their commitments to the global fund to deal with climate change. Chastanet said it was important to beef up international disaster relief before the next hurricane made landfall.

He said while governments have increasingly turned towards insurance to cushion climate-vulnerable countries against disasters, these were anything but a silver bullet.

“We are soon going to be uninsurable,” Chastanet said. “Some businesses on the island now had to devote 20 percent of their budget to insurance.”

The CARICOM chairman said that the international community also had to put a more solid system into place for the next climate refugees.

The Bahamas was battered by Hurricane Dorian, a Category 5 storm on Sept.1 that left at least 53 people dead and millions of dollars in damages. Chastanet called for governments of the Organisation for Economic Co-operation and Development (OECD) to create a dedicated fund for small island developing states and reconsider how the organization classified debt.

His Jamaican counterpart, Andrew Holness told the conference that the global financing system must be reformed. He outlined the need for climate risk to be mainstreamed into every part of the financial sector, noting the announcement from around 50 banks to assess their assets against their contribution to climate change.

Holness said that climate finance is being prevented from getting to where it is most needed, but he said initiatives that are removing barriers to finance are encouraging.

In her speech, Barbados Prime Minister Mia Mottley said one degree centigrade has already caused catastrophic damage to small islands. Mottley ignored attempts to cut her speech short by the U.N. moderator, saying she spoke for 20 percent of the world’s population in small islands. Mottley warned that the devastation of Hurricane Dorian will supersede all existing mechanisms for rebuilding.

“Make no mistake there will be mass migration by climate refugees that will destabilize countries not on the front line,” she said.