ANTIGUA - France and Germany, along with The Nature Conservancy, have pledged over US$45 million in contributions to the Caribbean Biodiversity Fund (CBF) to increase resources for biodiversity conservation. 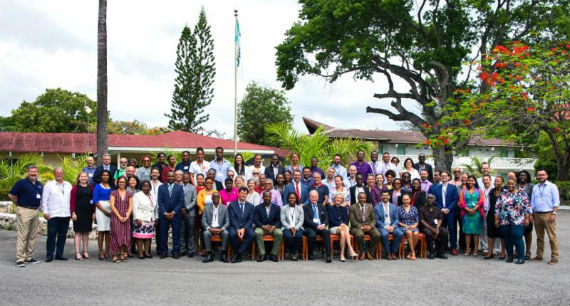 During last month's CBF Annual Meeting in Antigua, Ulrike Metzger, division head of regional development policy, Central America, Caribbean and Mexico for the German Federal Ministry for Economic Cooperation and Development, announced that her government would commit an additional €25.5 million to its current support of CBF and the Caribbean Challenge Initiative (CCI).

Metzger emphasized that Germany recognized the CBF and CCI achievements and their alignment with member governments' own support for the protection and sustainable management of Caribbean coastal and marine areas.

The additional funding will go to expanding CBF throughout the region. Further contributions will help the CBF establish a new facility to tackle the region's circular economy, plastic waste management, and wastewater treatment.

During the annual meeting, the French Development Agency also pledged a contribution of approximately US$13 million to support the CBF's Haitian trust fund, along with other endeavors. Similarly, The Nature Conservancy endowed funds totaling $3.5 million to the Bahamas, and $500,000 to Jamaica, to be overseen by the CBF.

"It is truly inspiring to see the strong outpouring of support for the Caribbean Challenge Initiative and its substantial work in the region, such as we've seen at this year's CCI-CBF Week," commented St. Lucia-based CCI Envoy Karolin Troubetzkoy. "CCI is all about increasing conservation action, both marine and coastal, in the region, while CBF is dedicated to providing a steady stream of funding for these good works, and this renewed and added support will absolutely make a difference in our concerted efforts."

CCI-CBF Week, held from June 16 to 20 in Antigua, drew more than 90 attendees from a dozen Caribbean countries and featured both the CCI Participants' Assembly and the seventh Caribbean Biodiversity Fund Annual Meeting.

Other major announcements at the event included joint action between the CBF and the United Nations Development Programme /Global Environmental Facility (UNDP/GEF) Small Grants Program, as well as Blue Finance's announcement of a partnership with CBF to develop innovative Caribbean financing solutions.

The meeting also hosted the signature of the Partnership Agreement between the CBF and the Grenada Sustainable Development Trust Fund (GSDTF), allowing the fund to receive annual transfers from the CBF endowment.

For further information, contact This email address is being protected from spambots. You need JavaScript enabled to view it..