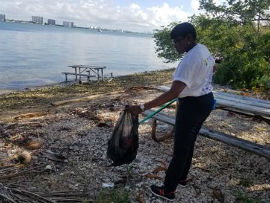 As she does every year, Chairwoman Edmonson participated in the annual event to clean up Biscayne Bay’s shores along with volunteers and staff, who pitched in with gloves and trash bags to pick up litter at Pelican Island and Morningside Park, two of the County’s designated cleanup sites located in District 3.

Before taking the short ferry ride from Pelican Harbor to Pelican Island to start the day’s cleanup activities, Chairwoman Edmonson released a rescued pelican as part of Pelican Harbor Seabird Station’s 40th anniversary celebration. The pelican had just received a clean bill of health after being treated for fishing hook injuries at the seabird station, which has rescued and rehabilitated thousands of birds and other wildlife since it opened in 1979.

“It was such a joy to release a rescued pelican before beginning our Baynanza cleanup activities,” Chairwoman Edmonson said. “Baynanza has always been close to my heart as one of the commissioners privileged to represent communities along Biscayne Bay. The Bay is one of our ecological treasures, so we need to keep it clean and beautiful!”