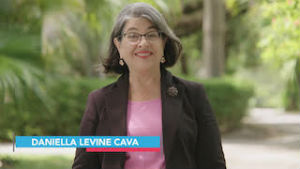 Miami-Dade Democratic Party Chair Steve Simeonidis shared, “In this defining moment in time, we need leaders like Daniella Levine Cava who will lead with vision and integrity. Daniella has led on critical issues her entire life and this election is a unique opportunity for Miami-Dade voters to elect a Mayor who will lead with science to get us through the pandemic and take on climate change with action. She will ensure access to healthcare is a right, especially as residents face the ongoing threats of a virus that is ravaging our neighborhoods. She’s running for Mayor because she wants to bring transparency, accountability, and progress to the Mayor’s office, and we will continue to invest resources so Miami-Dade residents hear directly from her.”

Miami-Dade Democratic Party First Vice Chair Maria Elena Lopez shared, “Miami-Dade voters are excited to elect Daniella Levine Cava because her vision for our County resonates with our community– her decades of experience, advocacy for every working family, and her willingness to bring people together, not divide us, sets her apart. We are proud to share her message  and help make history this November!”

To view the English version, use the following link: