Tampa- Ruth’s List Florida announced today 19 endorsements for pro-choice Democratic candidates seeking re-election. “Ruth’s List is proud to lend its sought after “seal of approval” to an incredible group of pro-choice Democratic women seeking re-election to state legislative offices. These legislators are the front-line fighters on issues that matter most to Florida families: womens reproductive choice, health care, education and protecting Florida’s environment. Our endorsed legislators are essential to turning back the clock on 20 years of Republican rule in Tallahassee.” Said Pamela Goodman, CEO/President of RLF. “Each of these women is a leader and trailblazer in her own right. Individually, they are changing their communities. Collectively, they are changing our state and our nation.” 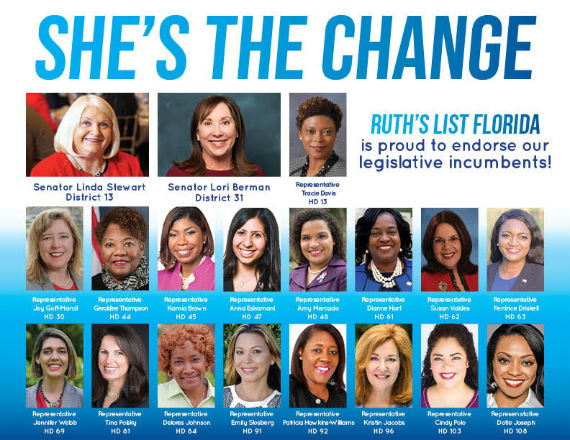 Ruth’s List Florida, founded in 2008, has raised over 5 million dollars, trained more than 1800 women candidates, and helped with the victories of 119 women at the state and local levels across Florida. In order to receive the coveted endorsement women must be pro-choice and running on the Democratic ticket.

The incumbents that are running for re election and receiving RLF endorsement are: