Miami, FL – Vice President Mike Pence today announced the launch of Latinos for Trump, which will work to re-elect President Trump with a focus on Latino coalition-building and expanding grassroot support. Latinos for Trump champions the President’s record and agenda within local communities and will work to identify supporters, empower activists, and help to deliver the President’s message of ‘Promises Made, Promises Kept’ across the country. 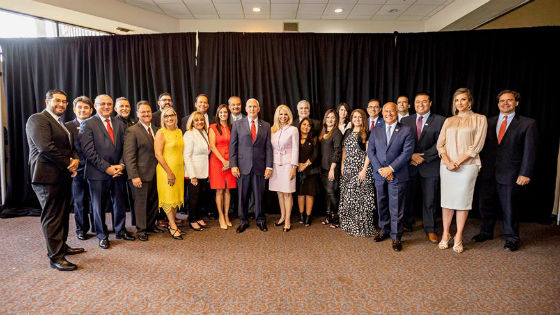 The outstanding members of Latinos for Trump are tireless advocates for the economic empowerment of all Americans. The members support religious freedom, increasing school choice opportunities, and the achievement of the American Dream. Coalition members represent Latinos from all walks of life: blue-collar workers, small-business owners, pastors, doctors, youths, and seniors. They know firsthand that President Trump has delivered on these issues for Latinos, that he has kept his promises, and that he will continue to pave the way – moving the country forward for all Americans.

“President Trump has delivered on his campaign promises and has served as a very strong champion for the Latino community,” said Florida’s Lt. Governor Jeanette Nuñez, co-chair of Latinos for Trump.  “As Latinos, we have all heard the promises of Democrats over the generations and we are tired of just lip service, President Trump has done more than just talk – he has put in place policies that have directly benefitted millions of Latinos and we want to see him re-elected.”

Under his leadership, President Trump has put ‘America First’ to the benefit of millions of hard-working Latinos. The Trump Administration has reversed the status quo and helped reignite the American economy by reviewing and repealing unnecessary regulations. This has resulted in the creation of nearly 6 million jobs since taking office and which has delivered the lowest ever unemployment rate for Latinos in history. President Trump has stood up to China to protect American jobs and has reversed the problems at V.A. hospitals so that our veterans receive the quality health care they deserve. The President has also worked to make our communities safer by securing the border and using the tools at his disposal to hold our southern neighbors accountable. The President’s strong support of enforcing immigration law resonates with many Latinos who believe that if their families followed the rules to become Americans, then other people should follow the rules as well.

The President has also empowered Latinos at the local level, supporting communities of faith, and giving parents the right to have a choice in their child’s education. During his time in office, President Trump has worked to make the American Dream a possibility for all, and Latinos for Trump is eager to stand shoulder to shoulder with the President to secure another term.

Serving Latinos for Trump as co-chairs are: Florida’s Lieutenant Governor, Jeanette Nuñez, Florida, and Margarita Paláu-Hernández of California. Together, they stand with the President in advancing policies that leave a lasting, positive impact for Latinos in America.

Other key advisory board members of Latinos for Trump include: