Scientists Discover How Mosquitoes Zero in on Our Sweat

MIAMI — Just like fresh-baked cookies or sizzling bacon is to us, the scent of your sweat is a mouthwatering aroma to mosquitoes. Now, scientists have discovered how these undesirable insects zero in on our delectable odor. 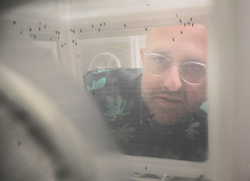 It’s actually the odor from lactic acid and other acidic volatiles found in human sweat that some mosquitoes are attracted to when seeking a blood meal. A team of researchers from FIU’s Laboratory of Tropical Genetics has identified a unique olfactory receptor used to detect these odors in Aedes aegypti mosquitoes, which are known to transmit dangerous and sometimes deadly diseases including yellow fever, dengue and Zika. The guilty receptor is known to scientists as Ionotropic Receptor 8a, or simply IR8a.

“People have been looking for more than 40 years,” said FIU biologist Matthew DeGennaro, who leads the lab where the discovery was made. “Even in the 1960s, scientists knew it was sweat and lactic acid, but no one knew how those were sensed. Back then, mosquito scientists didn’t have genetics.

DeGennaro made genetics history in 2013 when he created the first-ever mutant mosquito as a post-doctoral researcher in Leslie Vosshall’s laboratory at The Rockefeller University. He was able to remove a gene and investigate how the absence of that gene changed the mosquito’s behavior.

Since that time, he has worked with countless mutants in a process of elimination until he and his team landed on IR8a. DeGennaro had a hunch and tasked his Ph.D. student Joshua Raji with investigating the receptor. The scientists mutated the receptor in mosquitoes and, in several experiments, found IR8a mutants struggled to pick up the desired aroma of lactic acid and could not detect other acidic components of human odor. They were still able to detect CO2 and heat, which people emit, but their inability to smell a person’s acidic volatiles left more than half uninspired to feed.

Raji’s first test was on his own arm — first wild-types and then mutant mosquitoes. His scent was popular among the wilds, but not a single mutant took an interest in the first four minutes of exposure.

“I knew at that moment, this is it. This is real,” said Raji, who has dealt with his own bouts of Malaria while growing up in Nigeria and whose wife recently recovered from the mosquito-borne disease.

He repeated the test on 14 additional subjects. The results were the same. Not only did IR8a play a role in a mosquito’s ability to detect a person’s acidic volatiles — it is significant and necessary. There are no redundant receptors that can perform the same function.

The FIU team’s discovery could give rise to a new generation of attractants to lure adult mosquitoes into traps for population control. It could also give researchers a roadmap for making people invisible — at least to mosquitoes.

The team is beginning chemical screens in an effort to disrupt the IR8a pathway. DeGennaro’s ultimate goal is to create a life-saving perfume to protect people from mosquito bites.