Every now and then there's a TV show that's good enough to inspire background reading. One such program is HBO's Succession, which follows an extremely wealthy family's bitter infighting over the future of their media empire after the patriarch falls ill. The show is clearly inspired by Shakespeare, but also by real-life families like the Murdochs. Unfortunately, there are no recent books about Rupert Murdoch that I can enthusiastically recommend. 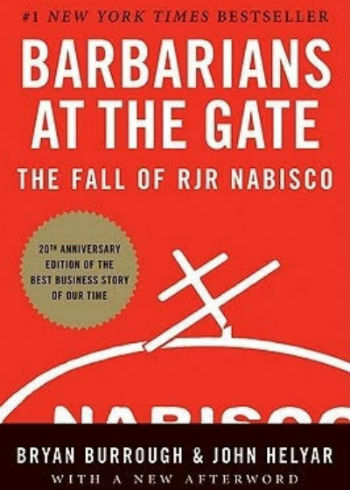 Instead, I would point curious readers to Kochland: The Secret History of Koch Industries and Corporate Power in America by Christopher Leonard (S&S, $35). The Kochs are much less ostentatious than Succession's Roy family, but a key section of the book deals with a vicious interfamily struggle over the future of the company that ends only after a decades-long legal fight. What is essentially an argument over money evolves into something much more personal: the brothers on each side reportedly refused to speak to each other for years, even at their mother's funeral.

Business is also personal in what may be the greatest business book ever written: Bryan Burrough and John Helyar's Barbarians at the Gate: The Fall of RJR Nabisco(HarperBusiness, $17.99). In terms of understanding the intricacies of buyouts and other high-finance schemes that play a part in Succession, Barbarians at the Gate is an excellent resource. It's even better, though, as a clash of personalities and, as with Succession, greed and betrayal of Shakespearean proportion. The characters in Succession can seem impossibly callous at times, but Barbarians at the Gateshows that this is no artistic invention.

The last book I'd like to recommend is a novel, Preti Taneja's We That Are Young (Vintage, $16.95). It also centers on a succession crisis, and could efficiently be described as King Learin India. Like Succession, it's a brilliant update of an enduring story. And, while it, too, is fictional, the narrative is just as easy to believe. --Hank Stephenson, manuscript reader, the Sun magazine