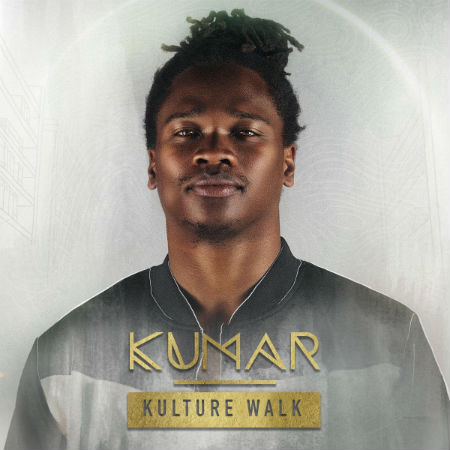 “How big is this world; because our minds are bigger than you think you know.... melodies that carry you to different places, visualizing new faces, embracing new stages, creating and elevating to the highest regions of our mind,” Kumar muses over the pulsating drum beat of the opening track, appropriately titled "There Is No Movement Without Rhythm (Intro)."

The stage is then set for the marching snares of "Trading Places," as Kumar's angelic vocals take centerstage on this song of hope.

Next up is the pop ballad "Live Another Day" featuring Jamaican crooner Chevaughn. The song is characterized by a melodic hook and rich instrumentation, complete with rock organs and a slide guitar solo.

The third track "Sailing" is a smooth cut that finds Kumar, whose Rastafarian beliefs are well-documented, using the story of Marcus Garvey's prophecy as a means of introspection.

Ever thoughtful, Kumar drops the "My Life My Message (Interlude)" before the beautifully-arranged opening saxophone notes of "Dry Bones" kick in. He revisits the standout tune later in the track list on a haunting acoustic piano version of the same song.

"One Day" is another unexpected pop-rocker from the Saint Elizabeth, Jamaica native. Here, Kumar recalls the wisdom of his elders, while a driving beat, piano, and guitars support his powerful vocals.

"Loyalty" employs a harsher tone on this r&b-flavored track, as Kumar questions "where is your loyalty?" to a former lover.

On an album full of surprises, "Race Of Your Own (feat. M1)," leads with acoustic guitars and organs that feel like a Stax-style introduction. Kumar brings another musical message of motivation, before the legendary M1 delivers a lively rap that reminds us to "march to the beat of your own drummers."

Deep in the track list is the album's first single "Remember Me." The head-nodding lead single is already getting play at SiriusXM, and the accompanying official video is racking up views on YouTube. Watch the "Remember Me" video here.

Closing out the collection is the disco dance party of "Jamaica." Kumar celebrates the sounds, sights, and vibes of Jamdown on this uplifting ode to the singer's beloved island home. This could easily be a contender for the next Jamaica Tourist Board campaign.

Kulture Walk is a mental, physical and spiritual movement set to music. Metaphysically, the exercise involves seeing the world brand new every day, exploring the fundamental nature of life, and reacting without bias. Creative people often possess an inner eye of consciousness, beginning at birth and remaining dynamic through life. Kulture Walk represents the musical revelations of a young man’s growth beginning with his own cultural perspectives embellished by the diversity of the world around him. Kumar’s new album is a roadmap of exploration into the mind and soul of this uniquely talented singer-songwriter. He rediscovers life’s challenges through an expanded lens of psychic awareness. Kulture Walk is a pathway of revelations resulting in philosophical expressions of self-awareness. Kulture Walk is the culmination of two years of dedicated work, releasing inner voices and memories amplifying Kumar’s lyrical potency. Worldwide travels influenced by cultural traditions enhanced Kumar’s interpretations of life’s observations. Kulture Walk takes us through the insecurity of past mistakes, embracing an evolved grasp of reality. When one loses hope, start again by "Trading Places" and strive to "Live Another Day." To drive for wealth without the richness of mind and body is a psychological trap. No matter how much one accumulates financially or materially, we are all just "Grains of Sand" that eventually die, go back to earth, and feed the plants.