Kingston, Jamaica: The highly-anticipated Aunty Roachy Festival and Ring Ding Concert, originally scheduled for this Saturday, September 7, Miss Lou’s birthday, has been rescheduled, and will now be staged later in the year. 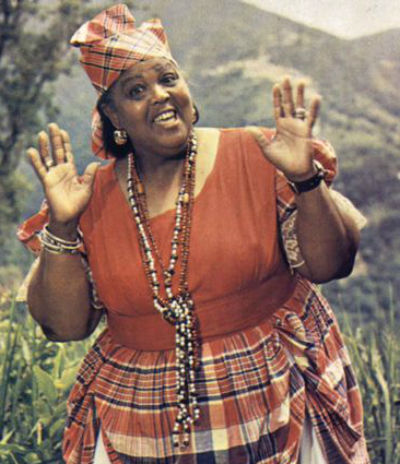 Miss Lou’s actual birthday (September 7) will get going with a GATHERING at her resting place at National Hero’s Park beginning at 10:00am. The public is being invited to join the Minister of Culture and other specially invited guests as we sing happy birthday to Miss Lou.

“We started Miss Lou’s centenary celebrations on Sunday, September 1 with a moving and uplifting cultural church service at the Coke Memorial Methodist Church, Downtown Kingston, which also marked the beginning of the 100 days of celebration for this revered cultural icon,” said the Honorable Olivia Grange, Minister of Culture, Gender, Entertainment and Sport.

“Over the next three months, we look forward to a myriad of memorable events that all Jamaicans can enjoy, whether at home or abroad, in keeping with the true spirit of Miss Lou. And just as we opened the centenary celebrations with a bang, we will also close with an even bigger bang now that we have rescheduled the Aunty Roachy Festival towards the end of the celebrations,” Minister Grange continued.

The Minister also noted that the celebrations would continue this weekend with the renaming of Gordon Town Square in St. Andrew to Miss Lou Square on Sunday, September 8, beginning at 5:00 p.m.

“Persons who were looking forward to celebrating Miss Lou this weekend at the Aunty Roachy festival are being asked to join us at Saturday’s Birthday Gathering and Sunday’s renaming event, both of which promise a memorable cultural showcase for patrons to enjoy,” the Minister outlined.

The Gathering will see members of the Jamaican theatre fraternity and the public gathering to pay respect to the cultural icon. The event will be led by notable Jamaican story-teller and cultural authority Amina Blackwood Meeks and will also see cultural items by the Manchioneal Culture Group and the CariFolk Singers.

Sunday’s Gordon Town Square renaming will see the Most Hon Andrew Holness, Prime Minister as the Keynote speaker, while cultural items will be performed by the Hertford Cultural Group, St. Peter & Paul Choir, Energy PlusMento Band and the Ascot Primary Choir amongst others.

Miss Lou Centenary Celebrations will also take place outside of Kingston with JCDC parish events and activities, including tribute concerts, displays, exhibitions and cultural competitions. There will also be the cutting of the Miss Lou 100t Anniversary Birthday Cake in Gordon Town Square on Saturday, September 7 at 3:00pm, an effort which will be led by the JCDC’s Kingston and St. Andrew Parish Office. The full listing of Parish Events can be found on the JCDC’s website at www.jcdc.gov.jm.

In addition to the events being organized by the JCDC, the Miss Lou Centenary Celebrations will also include events from local organizations, such as the University of the West Indies (UWI) Mona’s Gala entitled Miss Lou Labrish on Friday, September 6 at the UWI Undercroft; and the National Library of Jamaica’s Unlocking the Miss Lou Archive on Thursday, September 12, which will feature a special presentation entitled “Miss Lou’s Views – A Model for Development Communication?” by Media Practitioner and Cultural Authority, Dahlia Harris.

Born on September 7, 1919, Dr. the Hon. Louise Bennett Coverley was a Jamaican poet, folklorist, writer, linguist, comedienne and educator. “Miss Lou’ as she is affectionately called, is one of Jamaica’s most well-known cultural icons and pioneer of Jamaican Patois. She was a major proponent of the use of Jamaican language and lectured and performed in the United States, United Kingdom, Canada, giving the Jamaican Dialect international recognition. Miss Lou authored several books of poetry and short stories including Jamaica Labrish, Anancy and Miss Lou and Aunty Roachy Seh. On Jamaica’s Independence day 2001, the Jamaican Government appointed Miss Lou as a Member of the Order of Merit for her distinguished contribution to the development of the Arts and Culture. Miss Lou died in 2006 at age 87.