NEW YORK – New York Attorney General Letitia James says she is co-leading a coalition of 17 attorneys general across the United States in continuing the fight against efforts by the administration of President Donald Trump to threaten Caribbean and other “Dreamers” currently registered for the Deferred Action for Childhood Arrivals (DACA) program. 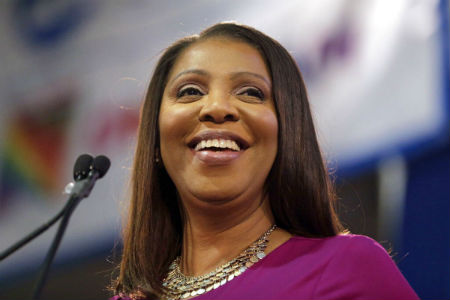 “James” DACA is a program implemented by the administration of former President Barack Obama to protect nearly 700,000 young Caribbean and other immigrants, known as “Dreamers”, from deportation.

After the U.S. Supreme Court ruled in June that the Trump administration’s attempts to cancel DACA were unlawful, the program was supposed to resume. Instead of processing new applications, according to James, the U.S. Department of Homeland Security (DHS) issued a new memorandum on July 28, by acting secretary of Homeland Security, Chad Wolf, which directed DHS to make interim changes to the program — including declining to accept any new initial DACA applications — while Wolf considered whether to fully rescind DACA.

In two court filings made on Aug. 28 against Trump, DHS, Wolf, U.S. Citizenship and Immigration Services and U.S. Immigration and Customs Enforcement, the coalition James co-leads— like it did in the original lawsuit — is amending the original complaint. The coalition also asked the court to immediately vacate the Wolf memo, in a motion for partial summary judgment, on the ground that it is — like the initial Trump administration policy to rescind DACA — unlawful and should never have been carried out.

“Despite the Supreme Court already ruling that President Trump’s attempts to unfairly punish ‘Dreamers’ was unlawful, he’s at it again — targeting innocent young people who are only trying to be law-abiding members of society,” James told the Caribbean Media Corporation (CMC).

She said “Dreamers” are foreign-born young people who were brought to the U.S. at a young age and now identify themselves as Americans. Most have no memory of or connection with the country where they were born. Many speak only English.

Under immigration law, before the DACA program, she said most of these young people had no way to gain legal residency in the U.S.

The coalition is seeking to have the July 28 memo vacated and for the DACA program to be restored to where it stood before the Sept. 2017 rescission, as the Supreme Court ordered in June.