Jamaica Recognizes Decades of Service with Order of Distinction

COCONUT CREEK, Fla.  –Jamaica’s Governor-General will bestow the Order of Distinction in the Rank of Commander (CD), a high honor, to Food For The Poor President/CEO Robin Mahfood. He will receive the award on National Heroes Day, Oct. 21, in Jamaica. 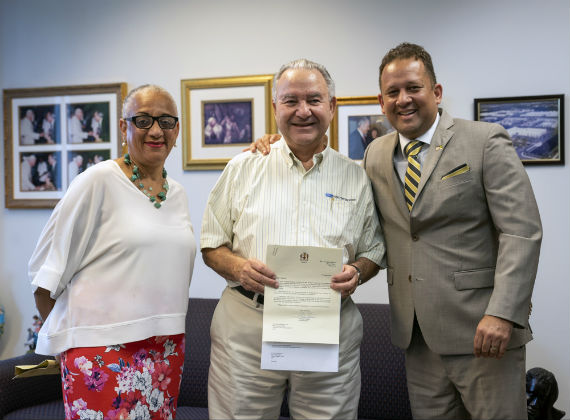 “Mr. Mahfood is one person who embodies what this award is all about,” Mair said. “He goes beyond the call of duty in order to help the poor. He’s not only a champion for Jamaica, but for all the 17 territories where the charity serves. I don’t think people fully understand what Food For The Poor does and it’s long overdue for Robin Mahfood to be recognized for his work with the less fortunate who are among us.”

Mahfood accepted the position of President/CEO of Food For The Poor in 2000, and over the last 19 years, the charity has become one of the largest in the nation. Since its inception 37 years ago, Food For The Poor has provided more than $15.3 billion in aid and has built more than 83,500 homes. Almost 36,000 of thesewere built in Jamaica.

The charity also provides assistance during disasters. Food For The Poor is providing disaster relief in the Bahamas after Hurricane Dorian destroyed much of Abaco, Grand Bahama Island and neighboring Cays. The Bahamas is not a region typically served by Food For The Poor, but Mahfood has always been committed to helping wherever there’s a dire need.

“Food For The Poor is much bigger than myself. Our donors and staff, who give of themselves day in and day out to help the suffering, they are Food For The Poor,” Mahfood said. “I am honored and humbled to be recognized in the country where this organization first began serving and I will be accepting this award on behalf of everyone who made this charity what it is today. It is my prayer that we have helped those where we serveto become closer to God, this is the greatest award of all.”

National Heroes’ Day is a Jamaican holiday, observed on the third Monday in October. It is a celebration of the island’s seven national heroes. Monday, Oct. 21, 9 a.m. at King’s House, Kingston, Jamaica, is wherethis year’s awards within the Jamaican honors system will be bestowed by The Most Honourable Sir Patrick Linton Allen, ON, GCMG, CD, KStJ.

Mahfoodwill receive the Honorary Order of Distinction in the rank of Commander (CD) for commitment to social welfare in the provision of housing. He’s one of 124 honoreeswho will receive national recognition for service to the country. Appointments of honor are made in accordance with the National Honours and Awards (Order of Distinction) Regulations, 1970.

Mahfood was born in Detroit. He graduated from high school at St. George’s College in Kingston, Jamaica, and continued with the Jesuits at Loyola College, Montreal, Canada. Mahfood is married with two sons, a daughter and four grandchildren and has lived in South Florida since 1977.