NEW YORK – After sitting on a Civil Court bench in New York for almost five years, a Bahamian American jurist said she has found her experience “rewarding”. 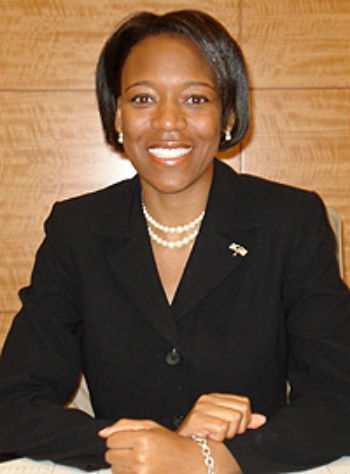 “I am grateful to be entrusted with the responsibility of making well-reasoned, thoughtful and fair decisions that impact the lives of the people who appear before me,” said Judge J. Machelle Sweeting, the only African American woman jurist currently assigned to the New York County Family Court, told the Caribbean Media Corporation (CMC).

“One of the greatest rewards as a judge are the success stories from people who report that their interaction with the court was a transformative and positive experience that empowered them with information, about unforeseen options, and that gave them the courage to change direction and make better choices,” she explained.

“As a judge, I have the unique opportunity to unleash someone’s potential.”

Sweeting, who received her legal training at Rutgers University School of Law in Newark, New Jersey, said although she was born in Harlem, New York, she frequently visits The Bahamas, where her late father, William Sweeting was born. Her mother Mary is from Harlem. Yet she has her own route planned.

“I remain committed to being a positive role model and to inspiring others in my neighborhood to pursue a career in law,” said Judge Sweeting.

“…Thus, I continue to reside in the beloved Village of Harlem, which is where I grew up.

I also visit The Bahamas to remind Caribbean nationals that the opportunities are endless.”

Before Sweeting, there had never been an African American women jurist assigned to the New York County Family Court since Judge Jane Bolin in 1939.  Bolin served for 40 years.

Like Bolin, Sweeting began her career as an assistant corporation counsel in the New York City Law Department as a founding attorney of the Special Federal Litigation Unit.

Recently, Sweeting said, she had “the esteemed privilege” to speak at Yale Law School in New Haven, Connecticut in celebration of the life and legacy of Bolin.

The 10th Municipal Court District in Harlem,  was “specifically created in 1939 to provide a pathway for talented legal professionals to become judges,” Sweeting said. Prior to that, she said the possibility of black lawyers becoming judges in New York had been “nearly impossible.”

In New York County Family Court, Sweeting said she has continuously served as an active member of the court’s strategic planning committee that is charged with the responsibility of developing ways to improve court operations and facilities to promote access to justice in the court system. She said initiatives that have been implemented include allowing litigants to file cases electronically and to have scheduled case “appointments” rather than being subject to long wait times in court.

Sweeting said to ensure the timely disposition of cases, she has been appointed to preside over a newly-created “trial part” and a “remote access part,” which allow litigants to appear before her by video, from a secure location, when appearing in person poses a harm or undue hardship.

Nicknamed “Sweet Justice”,Sweeting said she loves being a judge. In addition to her work in the U.S., Sweeting said she studied law in The Bahamas, the United Kingdom, Zimbabwe and Botswana. She has also been admitted to practice law in state and federal courts in New York, The Bahamas; Washington, D.C. and the Second Circuit of Virginia.

Prior to being elected a judge, she served as an assistant district attorney, assistant corporation counsel, law clerk to a Supreme Court judge, administrative law judge and an adjunct law professor.

“As a Caribbean American woman, the lens by which I see cases are broadened to include the collateral consequences and its impact on immigration, housing, families, employment and education,” said Sweeting.

“As a judge, I am able to mete out justice, with a passion for law and compassion for people.”