The Jamaica Cultural Development Commission (JCDC), an agency of the Ministry of Culture, Gender, Entertainment and Sport celebrated the 63rd anniversary of the birth of the late Reggae singerDennis Emmanuel Brown, CDon Saturday, February 1, with a cultural gathering at his resting place at the National Heroes Park in Kingston. 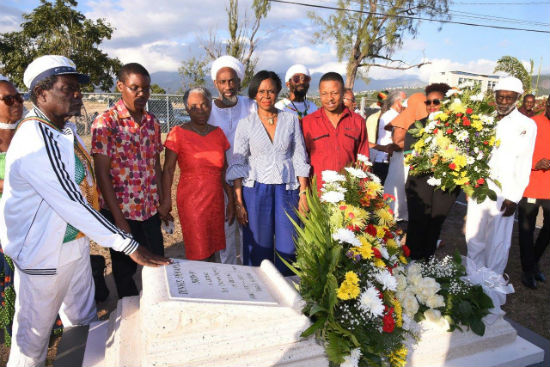 In her remarks, Minister Grange noted that Dennis Brown was one of Jamaica’s favourite child stars and also expressed congratulations to Koffee, the youngest Jamaican and first female to have won the Grammy Award for best Reggae Album. She also urged talented young people to follow their musical dreams and encouraged them to exploit modern technology while doing so.

Dennis Emmanuel Brown, an internationally-renown Jamaican Reggae artiste was born on February 1, 1957 and died on July 1, 1999. His prolific career began in the late 1960s when he was just eleven years old. Over his short lifetime he recorded more than 75 albums and was one of the major stars of Lovers' Rock, a subgenre of Reggae. Bob Marley cited Brown as his favourite singer, dubbing him "The Crown Prince of Reggae".