MIAMI-DADE – Today, on Black Women’s Equal Pay Day, County Commissioner Daniella Levine Cava called attention to the need for more economic justice and to close the wage gap, particularly for women of color. She reconfirmed her commitment to racial justice and pay equity while presenting a proclamation during a community forum sponsored by the Miami-Dade County Commission for Women and The Women’s Fund. 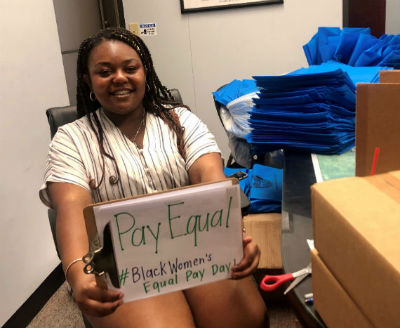 Janiia Williams, Homestead resident and intern in County Commissioner Levine Cava’s district office, shows her support for pay equity on Black Women’s Equal Pay DayBlack Women’s Equal Pay Day marks the day that symbolizes how long into 2020 Black women must work to earn what white men earned in 2019 alone. In other words, Black women are nearly eight and a half months behind in receiving their earned pay. Black women make only 62 cents for every dollar white men earn, and 21 percent less on average than white women. Over the course of their career, the pay gap accounts for almost $1 million in lost income for Black women.

“We need to get to a place where we as a society value Black women’s work as much as we do white men’s work,” said Commissioner Levine Cava. “We need actions and solutions to close the pay gap for women of color, and we can begin with local change.”

Commissioner Levine Cava is the leading advocate on the Board of County Commissioners to push for pay equity in Miami-Dade. She passed legislation creating a yearly report on gender equity and requiring vendors who do business with the County to sign an equal pay affidavit. She also invests in women and minority-owned businesses through a first-of-its-kind incubator called Accelerate South Dade.