As business hubs grow, the private sector must attract more talent to the area. But the Catch 22 for the government is that, as more people come, the more neighborhoods gentrify and the less affordable housing is available. Given this reality, how can Miami’s thirst for new talent be maintained? Through inventive new tax incentives, according to the city and state governments. 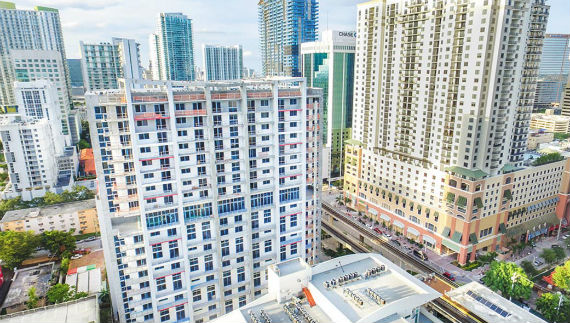 Since 2012, Miami-Dade’s population has been growing at a steady rate of about 1% per year, but the cost of living in Miami is well above the national average. According to Best Places, which ranks U.S. cities in relation to a national average of 100, Florida scores 110.9 and Miami 137.1. The cost of housing in Miami is by far the biggest expense, coming in at a whopping 174.3 to the US average of 100.

Florida’s corporate income tax rate also comes in at the lower end of the scale, especially in comparison to other major cities. At just 5.5%, it is lower than New York at 6.5%, California at 8.84% and Illinois at 9.5%. “Hedge funds and finance firms in places like New York, Chicago and California are feeling the burden of operating in high-tax states,” said Nitin Motwani, managing director of Encore Housing Opportunity Fund, to the New York Post.

This seems to be one reason why billionaire investor Carl Icahn this month announced his company would be moving from New York to Miami. But more than this, over half of his employees decided to move with the company, receiving a $50,000 relocation benefit each.

Icahn’s company will be moving to Magic City, in Little Haiti. As the name would suggest, the area was built on an influx of immigrants and refugees coming from Haiti in the 1970s. Now, with the $1 billion Magic City development, the neighbourhood is gentrifying fast. “Even if Magic City did not come today, the pace of gentrification is so rapid that our people will not be able to afford homes here anyways,” Marleine Bastien, a community organizer, told CNN. “Magic City is not the government. Affordable housing policies have to come from the government.”

Miami’s Mayor Francis Suarez is facing the issue head on. He championed the $400 million Miami Forever bond, designed to make Miami living sustainable. “We actually created in our first tranche of Miami Forever, a sustainability fund for people to renovate their homes so that they can stay in their properties rather than having to sell their properties,” he told CNN. So far $15 million has been allocated to these purposes.

Another development is a public-private partnership between Pinnacle Housing Group and the government to build Caribbean Village in South Miami Heights, which will have 123 units for older residents, with rents ranging from $420 to $1,070 per month. The need for that housing is more acute today than ever, and it’s exciting to be delivering Caribbean Village to the residents of South Miami-Dade County,” said David Deutch, co-founder and partner at Pinnacle.