In June 2019, Miami-Dade was the third largest metro area in year-over-year job gains in Florida, following Orlando-Kissi­­mmee-Sanford and Tampa-St. Petersburg-Clearwater. The County created 24,900 new non-agricultural payroll jobs (not seasonally adjusted) from June 2018 to June 2019, which was a 2.1 percent increase. The jobs were created in different industries with the highest job creation occurring in Education & Health Services (9,400), Leisure and Hospitality (5,400), Transportation, Warehousing & Utilities (4,800), Construction (3,400), Professional & Business Services (1,600), Other Services (1,400), Information (400) and Wholesale Trade (400). The graphs below show the payroll data since October 2017. 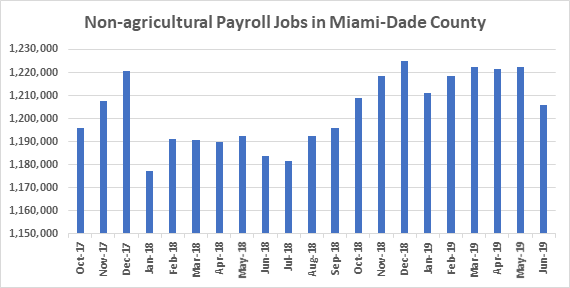 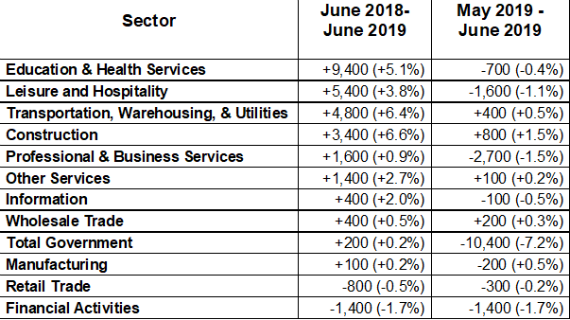 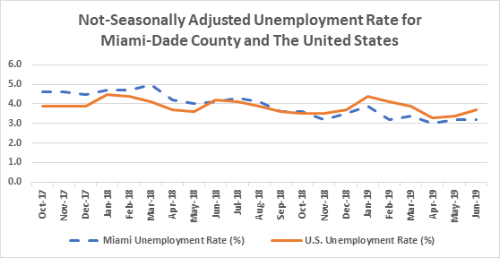 In June 2019, the seasonally adjusted unemployment rate for Miami-Dade County (taking seasonal fluctuations in the labor force into consideration) was 3.3 percent, which was a 0.4 percentage point lower than in June 2018.

From the data and analysis above, we see continued improvement in the local economy. Nevertheless, the community needs to remain focused on job creation projects in targeted industries. These industries have been identified as the industries most able to create additional well-paying job opportunities in Miami-Dade County, leading to an improved quality of life in the community. The Miami-Dade Beacon Council continues to aggressively work on attracting new companies to our community and work on the expansion and retention of existing business. For more information, visit www.beaconcouncil.com.