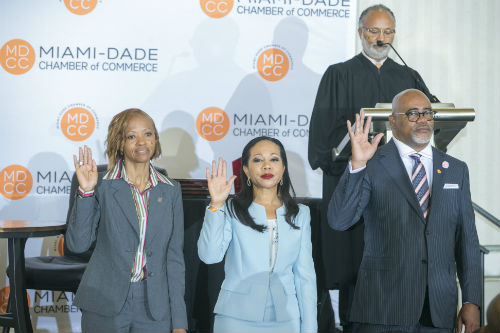 Teresa Foxx, Director and General Manager of Barclays (Board Chairwoman) Teresa Foxx joined Barclays in 1995 as the Audit Director, transitioning into her current role as Director & General Manager in 2004. As Chairwoman of the Miami-Dade Chamber of Commerce, she will also oversee the Board’s Executive Committee.

Shelia Powell Cohen, Director of Major Gifts and Faith-Based Organizations (Board Secretary) Shelia Powell Cohen is the Director of Major Gifts and Faith Based Organizations for Florida Memorial University, South Florida’s only Historically Black University. She served as a board member for one year before being voted as Secretary.

The Miami-Dade Chamber of Commerce was founded in 1974 by a group of Black business leaders out of a need for a strong organization that could objectively advocate the needs of a growing Black business community. To date, the Chamber has been led by four presidents, David Fincher 1974-1984, Dorothy Baker 1984-2004, Bill Diggs 2005-2013 and current President G. Eric Knowles 2014. Understanding that membership is the life blood of the Chamber, they have focused on meeting the needs of the membership by upholding our five pillars of service; access, development, procurement, advocacy and foundation.